Dear Friends, All Two of You;

Thank you so much for reading my plant-killing blog lo these many years. The posts have been sometimes nonstop, other times not at all. Always with my personal blend a little tiny bit of knowledge and wayyyy too much enthusiasm.

I'm so pleased to say that I've completely picked up and moved myself in several ways. First, career wise; I've finally let go of my PhD/med school ambitions succumbed to the world of plants. I'm working happily for a landscaper as a designer-in-training, loving what I do (even when it's shoveling mulch off a flatbed). I even manage to keep the occasional plant alive!

And I've moved literally. I've packed up my precious plants and moved across Chicago to start a teeny tiny urban farm. I live with the other two members of my gardening cadre, The Koumbit Collective. Growing and propagating plants is every bit as wonderful on a large scale as it was on a small one, and I even make a little money doing what I love. To keep up with me and my herbicidal horticultural misadventures, please check out our website and blog, listed below. And come meet me (and my roommates) at farmers markets and plant shows around Chicago this season. Maybe take home some of our plants and produce. It won't kill you (and if you take it away from me, it won't get killed either. Everybody wins).

I won't be updating this blog anymore, but the murderous saga is far from over. Thanks for your support. 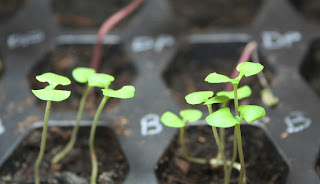 As you probably have guessed, I kill a lot of plants.

I also SAVE a lot of plants... from myself.

I have met more than one craigslist garden warrior from giving away plants.


But now I'd rather offer it to you, the avid indoor-gardener;

Would you care to rescue a plant from me, the Nature Assassin?

Currently, all I have is a lipstick plant (aeschynanthus), ; type unknown. Do you like in the Chicago area? Would you like to adopt it?

Wait 'till you see some of the plants I'm growing :)
Posted by Nature Assassin at 9:36 PM 4 comments: 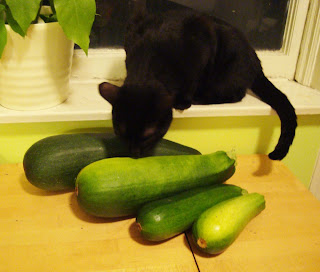 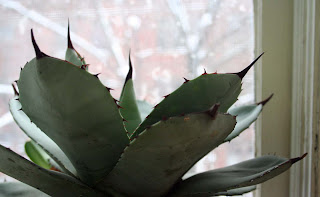 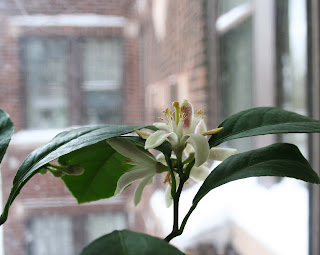 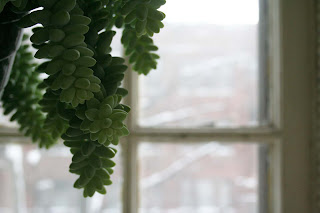 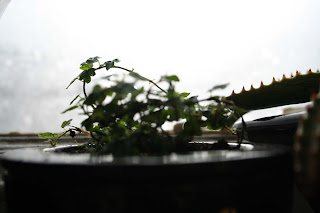 There's very little to report for spring and summer. Hardly any pictures, just jotted entries in my plant journals about watering and fertilizing. I filled my vegetable garden with drought-tolerant squashes that will accommodate my neglect. Concerning the alpha plants - meaning the houseplants - I've been so preoccupied that I've mostly focused on taking care of what I already, and keeping the "accidental" deaths to a minimum.

That being said, I bought a brand new Albizia today, and I've already killed that F. quercifolia. I can hardly wait to get another and try again. Insert evil laugh!

Posted by Nature Assassin at 12:22 AM No comments:

Pictures From My Shower... tradescandalous!

Of me? Nuh uh, you wish. I don't think you're ready for the proverbial jelly.
When I shower, I like to feel like I'm in the rainforest, minus the tropical diseases. So I installed an overhead shelf and stocked it with orchids and tropical vines, including Tradescantia flumensis (possibly 'Quicksilver') and Tradescantia zebrina. 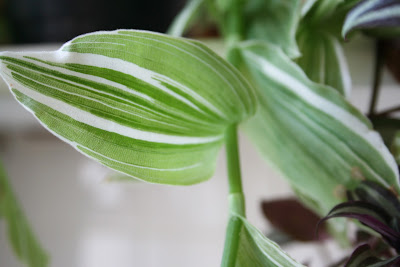 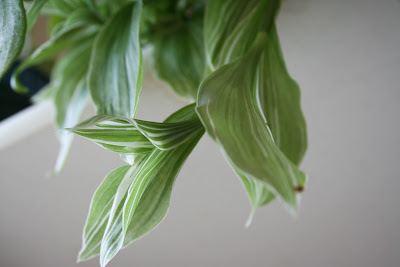 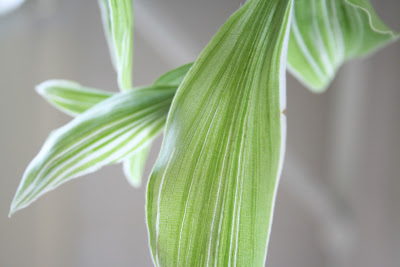 Then there's a staghorn fern (platycerium bifurcatum), silver squill (ledebouria spp.) and an aglaeonema (noid). There was a long, luxurious, sessy ponytail of spanish moss (tillandsia uesnoides) hanging from the curtain rod, which brought me joy during every shower. But then I went to the Garfield Conservatory for their awesome plant sale, and quelle surprise! It turns out LIVE spanish moss is a pale foamy green, like mermaid hair. That made me realize that the brown spanish moss in my shower had been dead for, like, months. Months during which I was lovingly patting it, and soaking it in cool water with fertilizer dilutions, and trying not to spritz it with soap or shampoo. My love was really accidental necrophilia. Oh well, live and learn!
Anyhow, welcome to my THIRD post of 2011, mid December. It's been pretty weird. Why wasn't I documenting my summer?!? The whole internet missed my vegetable garden! Isn't it funny how you get busy like that?
Posted by Nature Assassin at 8:20 PM 4 comments:

What is up with this freezing weather? I am tired of my puffy coat. It's May.


Sincerely,
Nature Assassin
UPDATE SCHMUPDATES
1) I entered myself into a lottery for a garden plot at my local park district, Ruby Community Garden. And BAM, son! I got one! I am gonna grow shit so hard. I'm gonna be out there on the daily, digging and hoeing. People will be like "GIRL YOU BESTA QUIT HOEING IT UP." And then I'll say, "NEVER." 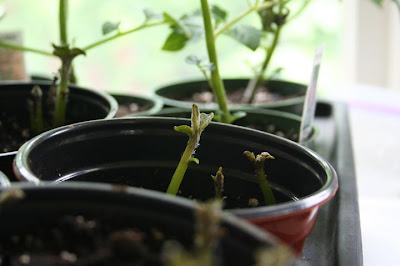 I know that these are not houseplants. I'm also sprouting some Albizia just to keep it kosher. 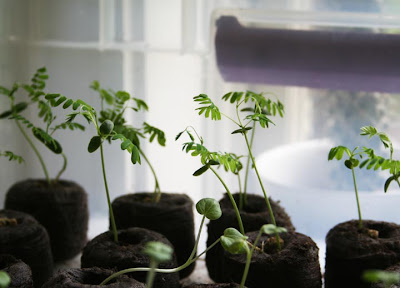 3) Latest project: worm composting! There's a big gnarly worm bin in my kitchen. I used a small drill bit to make about 120 holes in the lid of a plastic storage tub, just like the one I use for sprouting seeds. If the pictures look dark, it's probably because it is dark. In Chicago. Forever. 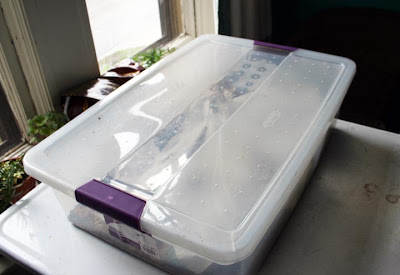 Anyway, vermicomposting is fabulous, eco-friendly and fun... until you actually see the worms. Then you sort of die a little inside. They led a revolt the other day; a dozen or so climbed up the side of the tub and almost escaped through the seam of the lid. Needless to say, there was some screaming, and I nearly Avada-Kedavra'd them right off the balcony. Repugnant little.... ew. Just ew. 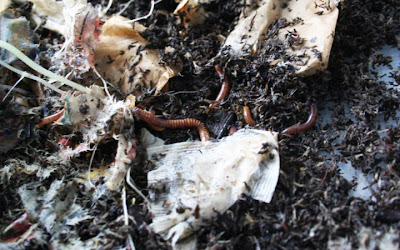 4) The Kombucha War rages on. Every time I get a new Scoby (which stands for symbiotic colony of bacteria and yeast), it tries to kill me... mostly by mold contamination, but the last one was more proactive. Photo below of the first tasting, which was gross, but did not kill me. I put the whole brew on top of the fridge and forgot about it... when I finally remembered to check on it, it had swollen up, eaten all the liquid in the jar, and was trying to climb out. Again with the screaming, and this time, I showed no mercy. I channeled my inner Sigourney Weaver, and sent that freak out the airlock. 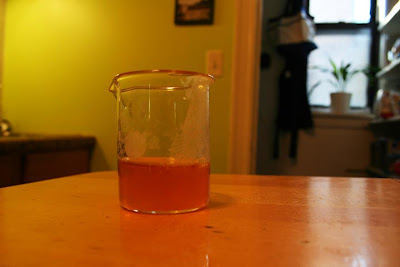 5) My citrus x meyeri brought aphids into the compound. You know that I do not brick with that shit. Normally I would just throw them all out. But since I've gotten all attached to my citrus trees, I hired some teeny tiny assassins instead. 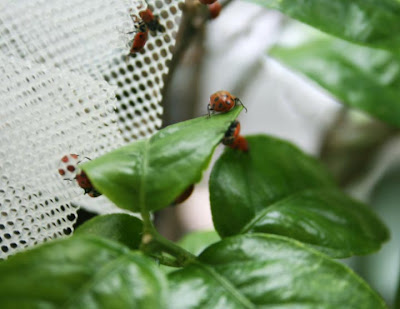 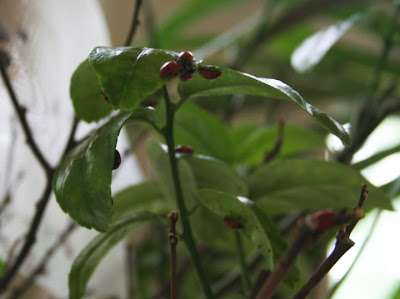 Sorry for the blurry photos. Those are ladybugs. I'm releasing about a dozen every day into my plant room. Weird? Yes. Extreme? Totally. But you know, there's something about watching those angry little tanks grab an aphid and SUCK IT EMPTY THROUGH ITS FACE that I just find to be really... hmm... satisfying.
So, lesson for the household organisms: don't mess with me, or I will kill you. Possibly with fire. Or pestilence. Now and then, a melee weapon.

More soon.
Posted by Nature Assassin at 12:24 AM 3 comments:

Sorry for the long delay, y'all! Here we go.


I love to germinate seeds. This spring, as usual, I'll give away asstons of seedlings. I'm going to germinate way more plants than I could ever reasonably use, just for funsies. The seed catalogs are pouring in, and I'm already in love. Moon and Stars Watermelon has got me waiting by the phone, crying, pining away. Anyway, growing tender seedlings indoors, with two cats around, can be somewhat... complex. 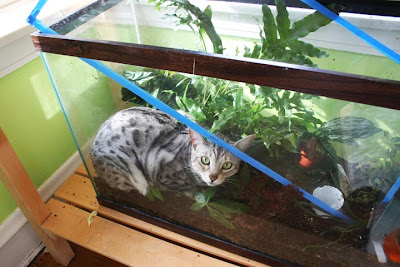 Dear cat. You're in my terrarium, crushin' my pachira, with your fat truck ass. What gives. Sincerely, your Overlord.
Everything has to be critter-proofed this year. I put a giant metal shelving unit right next to the heat radiator, figuring that the heat would speed up the germination process. Next, I needed a tough airtight container, like a seed incubator, but those things are wicked expensive. I've tried the soft plastic-covered trays that you might get from a home improvement center... unfortunately, Jiffy brand did not center their product design around domestic critter-attack. I was totally at a loss, until a smart friend said to me, "What about those plastic storage tubs, like they have at Target?" 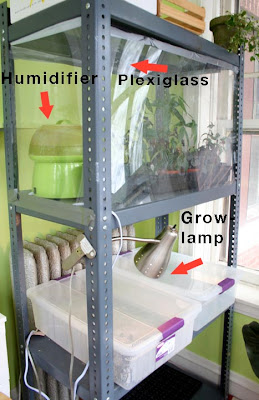 It looks a little jacked up, but it works just fine. The upper shelf contains my smaller tropical plants, enclosed in plastic. The front panel pops out so I can water and refill the humidifier. The second shelf is my seed incubators. The first seeds to go in were Dyckia 'Brittle Star,' provided by Turtlewalker at the fabulous blog Succulent Bromeliads and Others (thanks again!). Preparing Dyckia seeds for germination is a tricky process involving sugar, bleach, and prayer. Once prepped, I popped them in peat pellets and... 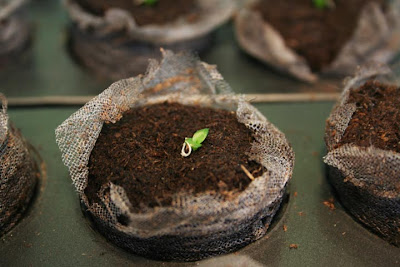 Isn't it cute?!? And it took no time whatsoever... maybe two weeks. More updates to follow.
Posted by Nature Assassin at 10:57 AM 2 comments:

So, this is my latest casualty list, Scottish-style. I guess I'm feeling a little gaelic. Like the black plague sweeping through the highlands in the 1300s and 1600s, I have swept through my indoor garden, leaving death in my wake. Seriously, look at how long this list is.

Alocasia infermalis 'Kapit' - Ah fergot to water that, too! 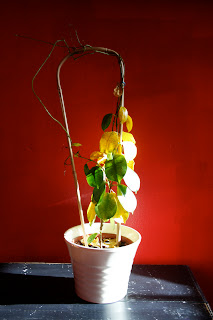 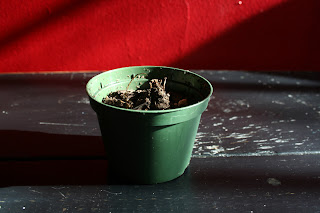 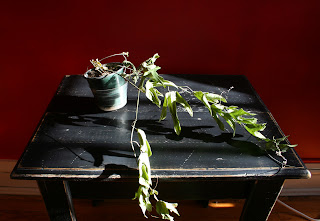 Podocarpus 'Bird's Tongue'
Sansevieria rorida - Ah'll never ferget you. Ah'll play a doleful tune, on me pipes, o'er yer grave.
Sedum spp. cuttings - FECK YOU, APHIDS
Tillandsia (various)
Yucca elephantipes
Now, keep in mind that this group has been accumulating for several months. It's not as though one weekend I just went on a massive killing spree. And I did manage to re-home several other plants on craigslist before they contracted a fatal case of kitten, otherwise this list would be longer. But you have to admit, it's still a pretty impressive death toll. I'm that monster in the scary story that plants tell their plantlets, to keep them in line. Hopefully some experiential knowledge was gained from all this, hopefully these failures have taught me more about success.
Hopefully.
Posted by Nature Assassin at 11:12 AM 10 comments:

Comics You Should Probably Read